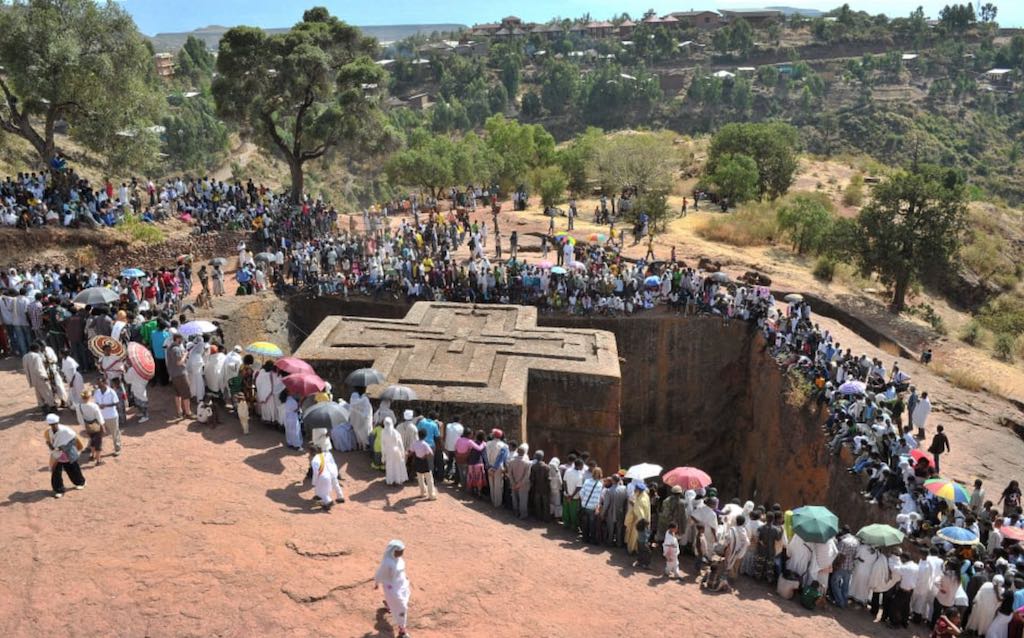 Today, a message arrives from a contact of mine that I publish and share in full as I received it.

The Ethiopian government, hell bent on misusing religious leaders and institutions for genocide, profiling and diplomacy against Tigray or to cover up its execution of genocide has continued unabated staging of bogus religious propaganda. The intention of using religious leaders, institutions and events is multi-dimensional, particularly the Ethiopian Orthodox Tewahido leaders or occasions. On one hand, it is meant to cover-up integrated genocide, and on the other, apparently to criminalize Tigray Defense Force, exaggerate and inflate ‘damages’ in Amhara region both for propaganda and resource mobilization purposes. This is in view of securing enough resources to fatten the bunch of Eritrean mercenaries, key politicians, Fano vigilante and Prosperity Party inner cliques’ pockets. So Amhara region and Eritrean government are the central drivers but Ethiopian Orthodox Tewahido elements such as Ato Daniel Kibret are planning to use religious occasions for political and genocide promotion purposes. It is also to use the Church for Amhara politics at the expense of other believers, as usual.

In this regard, we have learned that next Ethiopian Christmas is planned to be celebrated in Lalibella Church. There and then, drama is underway apparently to show Tigray Defense Force in bad light in front of international community and in the process radicalize Amhara constituency-using Church’s pulpit. Amhara elite, who want to make the world and themselves believe to be more Orthodox Tewahido believers and defenders than Tegaru are sacrilegious and unreligious in their intentions! They are high priests of hypocrisy and have always been using the Orthodox Tewhido Church to undermine, the culture, identity and languages of the Oromos, Tegaru, and others in Ethiopia. These elite have deep rooted tendency of using religion for political domination. Now, as continuation of the same, Ethiopian Christmas celebration is being planned to be high-end political, genocidal and propaganda event in Lalibella in cahoots with Ethiopian and Amhara regional governments. The group is led by religious political leaders such as Ato Daniel Kibret and some Prosperity Party leaning bishops. The event is planned to be special one to demonize TDF by showing dramatized ‘TESTIMONIES’ to the intentionally and purposively invited, dignitaries, diplomatic and media guests. The intention is to use religion against Tigray for political and genocidal purposes to justify man-made famine or starvation of civilians to death, continuation of war and arresting of Tigriyans everywhere.

It is proper to remember the series of Mr.Daniel’s and other Orthodox Tewahido Church leaders’ genocidal messages against Tigrayans in various public occasions in Ethiopia, in diaspora and on media platforms calling for total and unconditional elimination of Tigrayans. The political leaders of Amhara region including the former president of the region, Mr. Agengew Teshager have been calling for genocide on Tigrayans. Now, most Amhara elite in various positions, Eritrean security operatives in various places in Ethiopia, Amhara medias, and Daniel Kibret have planned to stage specially choreographed political Christmas in Lalibella, according to reliable sources. It is obvious that Church particularly has been under Amhara-Abiy state capture and eating into Tigray – despite Tigray being the land and people that evangelized Amhara and the rest of Ethiopia when it comes to the Orthodox Tewhaido faith. Therefore, as a continuation of using religion, religious events and leaders for promotion of genocide on Tigray, Christmas in Lalibela is to be qualitatively a propaganda and lie mongering event and not prayer event! So the faith and the Church have continued to be misused for far too long. Exaggeration of damages allegedly committed by TDF without independent investigation just to make-believe false reports and to find parallels of crimes they committed in Western and other parts of Tigray in collaboration with Eritrean forces, Abiy-Amhara elite are using all these exaggerations and diplomacy. The purpose is to relieve Abiy, Amhara forces and Eritreans criminals from accountability by implicating that ‘everybody committed similar ‘crime and so forth to draw false equivalence. Or even to solely paint TDF and absolve themselves from accountability.

Thus, the Ethiopian political Christmas in Lalibella is prepared to be a lecture event for ambassadors from different countries and medias in attempt to achieve the above intentions. Ato Daniel, the high priest of genocide on Tigray is the chief mastermind. He has Abiy’s blessings. Eritrean government operatives ensure the quality of the message: its intensity and emphasis. Diplomats are expected to believe and develop certain image of TDF. They are expected to pressurize their respective governments and societies against Tigray. So, if Jesus would come to the event, perhaps He would turn the tables upside down and rebuke Daniel and co by telling them, ‘you have made my father’s house, the place of mongering lies, preaching genocide on your fellow human beings on false accounts’. The Daniel –Abiy-Amhara-Isayas alliance are like Herod who persecuted children and from whom Jesus’ family escaped. Children in Tigray and Tegaru Children in other parts of Ethiopia are living under fear and persecution, famine made by these genocidal alliance, lack of medicine is killing many children, forces of the alliance raped children in Tigray with impunity. So, in essence, the Ethiopian Orthodox Tewahido leaders led by Mr.Daniel and some bishops have proved to all and sundry that they are not followers of Jesus of Nazareth; rather close disciples of Herod who persecuted children.

Therefore, ‘King’ Abiy parallels king Herod who massacred children in Bethlehem – he is Herod of the day. King Herod was supported by Rome. ‘King’ Abiy is supported by Asmara to kill more Tigrayan children and women by all means including combat drones. Some false and hypocrite religious leaders supported king Herod in his heinous campaign as peddlers of false prophesy and many fake religious leaders are supporting Abiy-Amhara and Isayas’ genocide on Tigray – epitomized by Daniel kibret. So the lies and atrocities during Herod times in the bible are being repeated on Tigrayans by forces of integrated genocide. The systematic long-term damage these satanic coalition has been perpetuating on Tigray is colossal and of biblical proportion.

Therefore, for well reflecting Christians and for learned diplomatic community, next Ethiopian Christmas at Lalibella has to be a day of reflection and recollection on Ethiopia’s massive misuse of religion for political purposes. In fact, it is time to imagine how children suffered through failure of religious institution or misuse of religion on the occasion of the birth day of child Jesus, how many children have been massacred by direct bombardment or through famine caused by siege put in place by Abiy and allies in Tigray genocide. It is a moment to question the obsessive lies of Ethiopian government, the cost of misuse of religious and political offices to cause damage, profile, and kill innocent children of Tigray. In essence, this war on Tigray has been war on women and children; because it used wide gang-raping campaign on women, young girls, destroyed health and school facilities. Eritrean, Amhara and Ethiopian forces did so to damage Tigray from generation to generation.

Christmas is about children, women and new life but not new lies in the name of religious festivities such as the one planned in Lalibella in upcoming Ethiopian ‘Christmas’ by inviting guests and showing inflated dramas to demonize Tigray forces.

Anyway, the new Herod that kills children with his local and foreign supporters has planned many lies and misuse of religion to reinforce genocide on Tigray, even beyond ‘Christmas’ event to be held in Lalibella. All religious institutions of the world, medias, governments, diplomatic community, social scientists must watch out and subject the whole process of politicization of religion in Ethiopia by Abiy to critical study. The religious structure in the country is being misused mainly in strategic service of systematic and all-rounded slow genocide on Tigray people. The Ethiopian Orthodox Tewahido Church and its leaders have become tools in the hand of master minds of genocide-and they lead the way in this regard. It is a pity. Therefore, the distinguished diplomatic Community in Ethiopia – be on the watch out about the political Christmas in Lalibela and also on overall misuse of religious institution in Ethiopia by Amhara,-Abiy and Eritrean forces. They are expected to create negative narratives; mostly by repeating intentionally designed rumors and continuously associating cooked crimes with Tigrayans. It is not about faith but genocidal politics. Overall, the religious institutions and leaders in Ethiopia have failed big time. On this note, all diplomatic community and international religiously affiliated institutions must consider Tigray related issues SOLELY through Tigray religious institutions or directly by themselves not through any Ethiopian religious institution. The head offices of Ethiopian religious institutions and their spiritual and development arms are already weaponized against Tigray, government controlled, and thus can never be of any help to Tigray. In fact, they cause systematic minimization of the need and falsifications of Tigray religious leaders calls for humanitarian support in various ways. The Ethiopian religious leaders and institutions are also not trusted and accepted by Tigray people anymore. Finally, let me reiterate that the diplomatic community should know better and not grace such camouflaged malicious event in Lalibella. Lalibella is a holy site, though this time it is targeted for unholy purposes.

Note: for parallelism between Abiy-Isayas and king Herod the Great-Roman government and massacres on Children anyone can visit the bible in (Mathew 2:16-18) and compare the reality for yourself.

I wish Merry Ethiopian Christmas to those who might celebrated it in genuine sense of Christian Christmas in Ethiopia. Happy New Year 2022 as well.