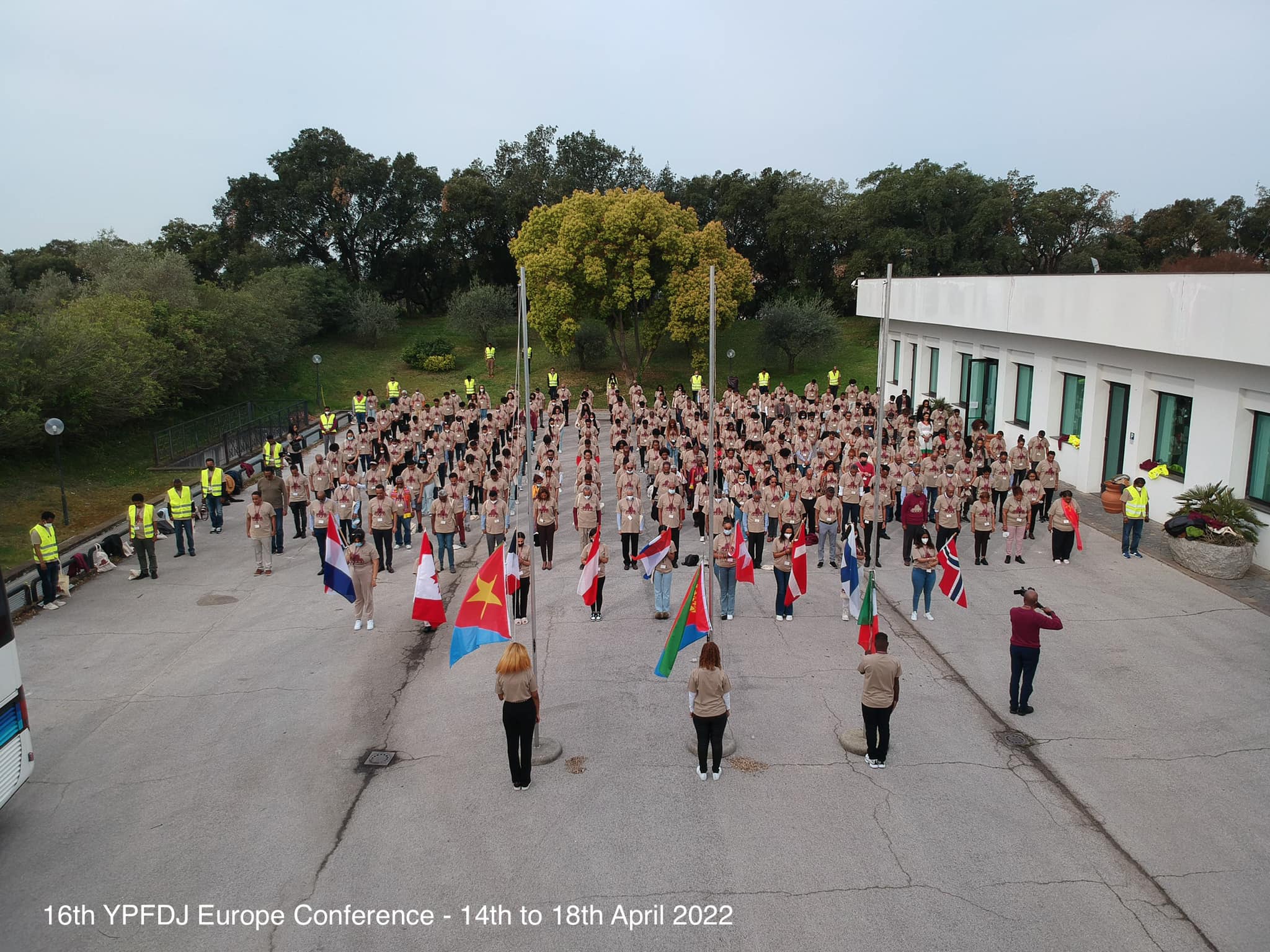 The Eritrean regime trains its young people in Rome

The YPFDJ conference, the youth section of the single party ruling in Eritrea for 29 years, was held in Pomezia. Young people from the diaspora catapulted to a secret destination. Why do they meet in Rome and what do they do without the Italian government intervening?

Perennial and underpaid military service, arbitrary imprisonment, religious persecution, torture, violence against the civilian population, rape and war crimes. From all this are escaping the thousands of Eritreans who oppose a dictatorship that, from emergency to emergency, has been perpetuating for the past 29 years. There are tens of thousands of political and religious prisoners, torture is the order of the day to expose opponents or to punish those fleeing the tough training in Sawa camp, which involves all children starting from the last year of school. Freedom of expression, in the country of the Horn of Africa, is a chimera. In 2001, dozens of prominent opponents were arrested, including journalists from newspapers not aligned with the regime, held in solitary confinement in special prisons, without ever being put on trial. At least ten of them died in detention, there is no news of dozens of others. However, escaping is not enough. In early 2021, Eritrean government troops entered the Tigray region of Ethiopia and destroyed the Hitsats and Shimelbaper camps, dispersing over 20,000 Eritrean refugees.

We are in Pomezia, 40 kilometers from Rome. A secret conference of the youth of the Eritrean regime party was held from 14 to 18 April in a 4-star hotel overlooking Pontina. Three hundred people from all over the world, the Eritreans of the diaspora, spent four nights, attending seminars and conferences at the SGH Antonella hotel in Pomezia. The participants were picked up at the airport without knowing the destination, on which the utmost confidentiality was kept until the last second, to celebrate the sixteenth annual congress of the YPFDJ, the youth organization of the Popular Front for Democracy and Justice ( PFDJ), the single party of President Isaias Afewerki, in power in Eritrea since 1993. In July 2014, a similar initiative was contested in Bologna by the regime’s opponents, gathered in democratic Eritrea. In the summer of 2018, the European gathering of the diaspora was blocked by an order from Jack Mikkers, mayor of Veldhoven, the Dutch city where the event was to take place. After a two-year break due to Covid, this time the choice fell on an isolated hotel near Rome.

Secrecy must keep protesters, onlookers and journalists “in the pay of the West” away. Therefore, the entire category is forbidden to enter and, near the hall of the hotel hosting the event, some bodyguards equipped with radio and earphones keep away indiscreet eyes and ears. “The event is open to subscribers only”, says the assistant of Mr Pietros Menghistu, the Eritrean ambassador to Italy, who in turn is not available for interviews because “he does not want to show off, due to his character”. The four days are attended by Eritrean ambassadors accredited to the main European chancelleries but also high-level government representatives, such as the chief of staff and deputy of the dictator, Yemane Gebreab who, a few days after the Roman meeting, on April 28, would have flown in Moscow, at the invitation of the Russian Foreign Minister Sergei Lavrov, “to agree on concrete measures with a view to strengthening relations in the political, diplomatic, commercial, investment sector, and at the educational and cultural level between the two countries”.

“It is absurd that in Europe, in this case in Italy, these conferences of regime propaganda are tolerated,” said Fr Mussie Zerai, priest, Eritrean activist and president of the NGO Habeshia, known on the Mediterranean route as “the angel of refugees”. ” These meetings serve to train the second generation, especially the children of the old guard. They are people raised in the West who are thus linked to the regime with the idea of ​​making them its spokespersons in Europe. They must be the most presentable face of the dictatorship “, explains Don Zerai. Those who flee now, in short, risk not finding the necessary support of their compatriots in arriving in the new country.” The newcomers prefer not to talk about it, “says the Eritrean priest,” if you expose yourself, avalanches of insults arrive online, profiles are activated from all over the world and your social message boards are flooded with pro-regime content. Often then the Eritreans in Italy are in dire economic conditions and are engaged in the battle for survival, politics becomes secondary “.

“We have 300 seats, all the rooms booked for four nights, in April, stuff we haven’t seen for years” a waitress giggles, intent on clearing away the leftovers from the unusual meal. Overnight stay and full board, the whole organization – Booking at hand – it cost no less than 50 thousand euros: excellent income for an accommodation facility after two years of pandemic, a decent outlay for the organization that covered an unknown percentage of the expenses. “Everyone pays a share to their national section, then there is a part covered by the YPFDJ which is financed through fundraising activities in the individual countries of origin “, Rahel Weldeab Sebhatu, political science researcher at the University of Malmö, answers us, unique among the dozens of people contacted. in Sweden, a feminist and pan-Africanist militant, one of the speakers at the congress.

Rahel gave a conference on the role of the Eritrean diaspora in spreading the ideas of Pan-Africanism, on the process of identifying the Eritrean nation and on its millennial history in the Horn of Africa. “There were many 15, 16 year olds who create relationships during initiatives, lunches, dances, maintain a bond between refugees”. Second generations, who have never known their parents’ country of origin, educated according to the solid principles of the revolutionary party ruling in the motherland. Among other speeches, Biniam Berhe, Eritrean ambassador to the African Union, Abraham Zerai, archaeologist, former researcher at the University of Turin and the American journalist Eugene Puryear, voice of Radio Sputnik, newspaper in orbit in the Kremlin. A synergy that is not surprising, given that Eritrea is one of the five countries to have voted on March 2, 2022 against the suspension of hostilities in Ukraine, at the UN, together with Russia, Syria, North Korea and Belarus.

Among the most anticipated guests at the convention is Simon Tesfamariam, supporter of the #nomore movement, a campaign supported by Ethiopian and Eritrean activists against disinformation and Western interference in the Horn of Africa. Simon is director of the New African Institute, an “independent think tank”, on whose website there is only one contribution: a report, written by Simon himself, which confusingly uses fact-checking techniques to demonstrate the non-existence of evidence of the use of violence by the Eritrean army in the conflict against the Tigray rebels. In the pamphlet, the only contribution published by the institute’s account on the Medium online platform, the author accuses the West of producing false evidence on war crimes allegedly perpetrated by Ethiopian and Eritrean military forces in Tigray. Something very different from what is claimed by numerous reports from international organizations, among the latest that of the Joint Investigation Team (JIT) of the Ethiopian Human Rights Commission (EHRC) and of the United Nations Human Rights Office (UNHR) which denounce the systematic violation of rights human beings by all parties to the conflict.

It is impossible to know who actually financed the event. The staff of SHG Antonella Hotel, on Facebook, however, declares itself proud to have hosted it. When asked who and when contacted them to organize the party meeting, the management replies that we will soon be contacted by the customer. Despite repeated requests to the embassy and members of the local branches of YPDJF, it was impossible to obtain an answer on this point. At the end of a day of meetings, outside the hotel, we see a white man, wearing a party shirt, a camera around his neck. It is Stefano Pettini, founder of the Eritreaeritrea site, sent to Eritrea in the early 2000s with the Italian Air Force, as part of the UN mission UNMEE. “We give a derogatory sense to the dictatorship, the Romans had already invented the concept of total delegation of power in a moment of difficulty”, he explains. “It is the Eritreans who have given responsibility to Afewerki, who in fact walks quietly through the streets of Asmara, without anyone telling him anything”. It is easy to imagine it, in a country that still today, every year, sees thousands of its young people take the long and dangerous road that from Sudan, passing through Libya, will lead them to democratic Europe.

This article is part of a series of investigations on the Eritrean regime, carried out as part of a project of the Permanent Journalism Center, funded by the Vitamin G call for the Lazio region.