Fano, the Deadly Variant of Amhara Politics: The Babied Terrorists.

Today, a message arrives from a contact of mine that I publish and share in full as I received it.

Deploying, arming and eulogizing loosely organized, unaccountable, deadly youth with violent ethno-religious fervor for quick political gains is inept trend that has been creeping into Ethiopian politics. Particularly in the past two years. Amhara’s Fano stands out as the most outstanding threat to the country’s unity, cohesion and development, many believe. This group has diaspora base with media-savvy. Totally unaccountable hooligans – they enjoy the religious and local administration’s backing. And yet, comically, while ‘terrorist’ tag is being assigned to TPLF and OLA, Amhara Fano which is well-armed, unaccountable and ultra-murderous force, roams the country beyond law. Not only that, it kills, gang-rapes and loots at will particularly the Tigrayans. The genocidal acts of this group in the Western Tigray such as in Wolkait, Dansha, Mai-Kadra, Humera and other areas has been abysmal. The group extorts money from any passing vehicle and from investors. Some Amhara investors hire these terrorists to cause damage on other investors and ethnic groups such as in Westen Tigray and Benishangul Gumuz. Tigray properties and businesses have been ransacked. Tigray ethnic groups including women, elderly, young men and children were brutalized by this group, with no sense of remorse. They rode on the back of Eritrean mercenary army, Amhara regional government and diaspora eulogy machines such as Ethio-360 Media, Menelik TV and ESAT among many outlets. The finance for the arms supplies to the group is footed by Ethiopian government from Ethiopian tax payers’ money. The Ethiopian government assigned this group to expedite the Tigraygenocide in order to completely break Tigray for good. Amhara leaning medias in diaspora and at home continue to whitewash the group as heroes while the group has always been known for looting and killing spree. 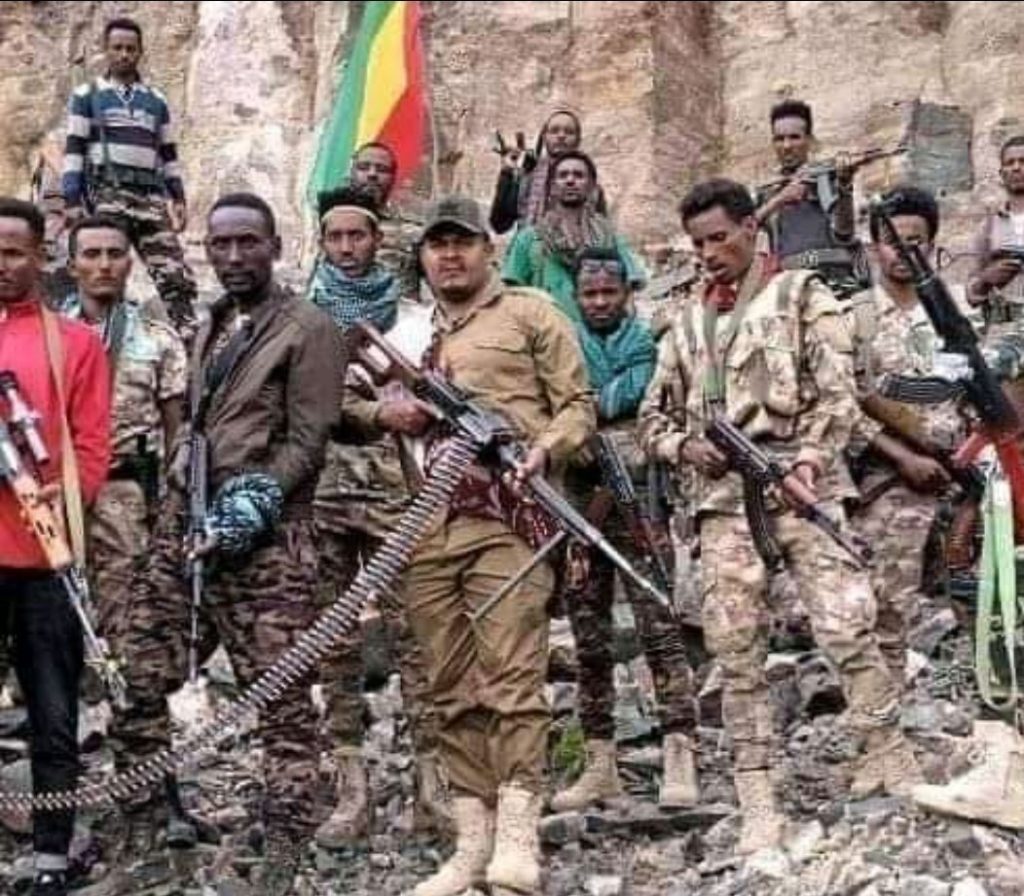 Since war has been declared on Tigray – Amhara region, Ethiopian and Eritrean governments armed, financed and encouraged this group to do all the dirty work to top up their own effort on genocide. Overall, it is difficult to count the heinous acts of this group. It might remain impossible to calculate the long-term negative impact on the human condition of Tigray people. All along, the chauvinist and expansionist Amhara elite from near and far poisoned the group with vitriol. The genocidal acts by the group has been sugarcoated as acts of patriotism while they were just killing unarmed Tigray civilians. In fact, the main fighting by TDF has been not with Fano; but mainly with Eritrean army, Ethiopian army, and other regional forces, Emirati and Turkey combat drones. So, the group did carnages on Tigrayans entering to the Tigray region on the wings of Eritrean forces. Therefore, if Ethiopian law would be considered to be applied to all Ethiopian groups irrespective of being from Tigray, Oromia or Amhara, Fano would be number one terrorist group in terms of its acts. Now, the Amhara and Eritrean government dominated Ethiopian parliament’s decision; it designated TPLF and Oromo Liberation Army (OLA) as terrorists while paradoxically, it left itself and Fano from the list.

Unbridled Fano, charged with shared narrative boosted by ethno-religious vehemence of Amhara elite proved to be extremely genocidal in action and passion. The media side of it is full of polemics against Tigraians, Oromos, and groups in Benishangul Gumuz region. The group is apparently used to kill retreating Ethiopian soldiers when the soldiers start retreating in the middle of war. This is in order that the Ethiopian soldiers may have no option to retreat but continue fighting until they die or defeat TDF. Fano is the most favorite from the point of Eritrean government and Amhara elites’ anti-Tigray, anti-Oromo, and anti-Quemant appetite. Thus, it implements the genocidal interests of those forces. It invades, Benishangual Gumuz and Oromia region to attack other ethnic groups and expand the land ownership in those regions; based on fake stories of ancestral land, fabricated by Amhara elite. Accordingly, going by global standards, the Fano and Amhara special forces are terrorists par excellence! If Ethiopia hopes to return to semblance of the land where the law applies same for everyone, it will remain impossible as long as Fano larks freely while TPLF and OLA are declared terrorists. Such kind of irresponsible politics leads to disintegration of the country. Fano and Amhara forces use state resources to terrorize, loot, rape and invade Tigray, Benishangul Gumuza and parts of Oromia regions; while self-defending OLA and TPLF who all along kept calling for inclusive dialogue are ignored at high tables. Whom are Abiy and Amhara trying to fool here? Therefore, we feel it is good to suggest the following corrective actions:

Apart from Eritrean mercenary soldiers, no one matches Fano in the lawlessness, killing, intimidation, misuse of religion, and profiling of other ethnic groups. The group is also radicalizing school youth, endangering not only peace but also the life of the youth. The group manifests Orthodox Tewahido extremist tendencies. So, the Ethiopian government, Amhara government and partners of Ethiopia should watch this group. Now, this group is trained using Ethiopian budget only for the group to end up being a challenge to any prospect of dialogue in the country. This is, of course, if dialogue is to be there at all. As of now, even if war on Tigray and Oromia stops, the group may become another obstacle to the already exhausted economy and peace. So national leadership must take timely ‘law enforcement’ measures.

On the other hand, the Amhara elite want Fano to be like bargaining chip to counter possible political challenge that might come by the existence of OLA. All said and done, as long as the group continues with its works and words at the current tone, national dialogue, business, and governance will be difficult. Final burden of the group and its legacy will be mainly for Amhara region. It will hurt the region as it hurts others. Time to apply the ‘law enforcement’ on the group. However, some probably will be given space and training by Isayas and continue to make problems. Others might attempt to emulate TDF and go to the mountains. From now on, their presence is good for Oromia, Benishangul Gumuz and Tigray regions; they might be even strategic ally. Wild idea? Fano is funny. Whatever may happen, Fano Rest in Peace (RIP). Diaspora Amhara elite can support the group through channeling hard currency to Eritrea. Eritrea will organize and train the group, no doubt.